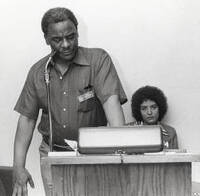 In honor of what would be his 100th birthday, this exhibit focuses on the 51st mayor of Chicago, Harold Washington (April 15th, 1922–November 25th, 1987). During his life, he served in the Illinois House, the State Senate, and the U.S. House of Representatives; in 1983, he garnered support from voters of all races, and despite pushback and cruelty, became the city’s first Black mayor. His time in office, which followed the years of “machine politics” enforced by Richard J. Daley, brought about changes that benefited marginalized communities and the city at large.