The World's Columbian Exposition of 1893 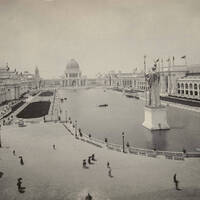 Introduction
Planning and Vision
The White City, Midway Plaisance, and Ferris' Wheel
Legacy of the Fair
Sources and Further Reading

The IDHH contains some content that may be harmful or difficult to view. Our cultural heritage partners collect materials from history, as well as artifacts from many cultures and time periods, to preserve and make available the historical record. Please view the Digital Public Library of America’s (DPLA) Statement on Potentially Harmful Content for further information.